MoU signed between India and USA for LIGO-India

India and the US have signed an MoU for establishing a Laser Interferometer Gravitational-Wave Observatory (LIGO) in India that will play significant role in carrying forward frontline research on various aspects of gravitational wave astronomy.

The MoU comes about a month after the Union Cabinet approved the construction of the long-awaited third LIGO interferometer.

Department of Atomic Energy Secretary Sekhar Basu and the US’ National Science Foundation (NSF) France Cordova signed the MoU in this regard in the presence of Prime Minister Shri Narendra Modi and LIGO scientists at Washington. 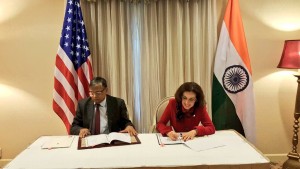 The construction of the long-awaited third LIGO interferometer, expected to be functional by 2023, will significantly improve the ability of scientists to pinpoint the sources of gravitational waves and analyse the signals.

LIGO will provide Indian researchers with the components and training to build and run the new Advanced LIGO detector, which will then be operated by the Indian team, the press statement said.

In a statement, the Union cabinet had said “LIGO-India will also bring considerable opportunities in cutting edge technology for the Indian industry” which will be responsible for the construction of the new observatory’s four-kilometer-long beam tubes.

In addition, the Cabinet statement said “The project will motivate Indian students and young scientists to explore newer frontiers of knowledge, and will add further impetus to scientific research in the country.”

Indian scientists at Raja Ramanna Centre for Advanced Technology (RRCAT) Indore have designed a special testing/prototype facility for receiving Advanced LIGO parts; have been training the teams that will install and commission the detector; and are currently cross-checking the IPR vacuum-system drawings against the Advanced LIGO detector drawings, to ensure a good fit and rapid installation for the third Advanced LIGO detector.

In addition to leading the site-selection process, the Inter-University Centre for Astronomy and Astrophysics (IUCAA) scientists have been setting up a computing center for current and future data. This preparation should make it possible for India to carry the project forward rapidly, it noted. “We have built an exact copy of that instrument that can be used in the LIGO-India Observatory,” said David Shoemaker, leader of the Advanced LIGO Project and director of the MIT LIGO Lab.